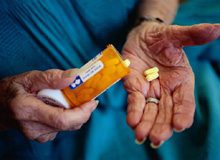 Recent studies indicate that more than 100,000 Americans die each year as a result of “adverse drug events.” These are not deaths from overdoses or incorrect prescriptions, rather these wrongful deaths are caused from side effects from properly prescribed medications that are used as directed. To put this staggering number in perspective, 100,000 deaths is more than four times the number of Americans who die each year in traffic accidents. It is the equivalent of having five fully loaded 747 jumbo jets crash each week – one person dying on average every 5 minutes. Because “adverse drug events” are often unreported, many experts believe the actual number of yearly deaths attributed to prescription medications could be as high as 200,000.

Back to Wrongful Death

Lost Your Job After a Columbus 18-Wheeler Crash? A Lawyer Can Help

A collision with a big rig can cause injuries that make returning to work impossible. If you’re in that situation, an 18-wheeler accident lawyer in Columbus might have the solution you need.   By building a solid personal injury claim, an attorney can seek...

END_OF_DOCUMENT_TOKEN_TO_BE_REPLACED

A voluntary recall has been issued for Philips Respironics ventilators, BiPAP, and CPAP machines due to potential health risks. The polyester-based polyurethane (PE-PUR) sound abatement foam used in these devices may break down and potentially enter the device’s air pathway.

END_OF_DOCUMENT_TOKEN_TO_BE_REPLACED

What Is the Average Truck Accident Settlement in Ohio?

If you or a loved one sustained severe injuries in a semi-truck accident or 18-wheeler collision in Ohio, you deserve justice and fair compensation for your injuries, lost income, pain and suffering, and more. In Columbus and throughout Ohio, Clark, Perdue, & List...

END_OF_DOCUMENT_TOKEN_TO_BE_REPLACED

The link between COVID-19 and vaping is becoming more apparent as new research emerges. Evidence shows that the virus may have an easier time infecting the lungs of smokers and vapers.  According to a recent article in the New York Times, smoking appears to alter the...

END_OF_DOCUMENT_TOKEN_TO_BE_REPLACED

A recent report in the Journal of the American Heart Association shows that vaping damages the heart just as bad as traditional cigarettes.  E-cigarettes or vaping was once considered a safer alternative to smoking, but continuing studies are debunking this claim....

END_OF_DOCUMENT_TOKEN_TO_BE_REPLACED

E-Cigarette Companies Asking for An Extension from the FDA

Due to the recent coronavirus pandemic, e-cigarette makers are looking for an extension on their Food & Drug Administration (FDA) applications. A deadline of May 12, 2020 was previously set as a result of a lawsuit filed by the American Academy of Pediatrics.  The...