On February 6, 2019, an Indianapolis jury awarded $3 million against Cook Medical, finding that its Celect IVC Filter suffered a design defect which resulted in an injury to the plaintiff, Tonya Brand. An IVC (inferior vena cava) filter is used to prevent pulmonary embolism. The award represents compensation to the plaintiff for her injury; the jury declined to award punitive damages. 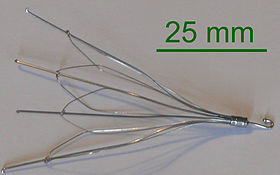 An IVC filter is a medical device placed in the inferior vena cava, a large vein leading to the heart. It’s purpose is to stop blood clots from traveling to the heart or lungs with potentially fatal consequences. Some patients claim, however, that IVC filters manufactured by Cook Medical and others, can deteriorate and fall apart, the pieces perforating artery walls and becoming lodged in bodily organs.

Tonya Brand claimed that her IVC filter broke apart and that pieces of the filter needed to be surgically removed. Some of the pieces could not be safely removed and will remain permanently inside her body.

The case was part of the multi-district litigation (MDL) against Cook Medical where more than 4800 similar cases have been filed. The verdict came in the third ‘bellwether’ case set by the MDL. A bellwether trial is designed to test the plaintiffs’ design defect claims. The two previous bellwether trials resulted in decisions in favor of Cook. It is unclear whether the results of the three trials will lead to settlements in the remaining cases.

A similar MDL is pending in Arizona involving IVC filters manufactured by C.R. Bard Inc. In that case, four bellwether trials have been conducted so far. One resulted in a jury verdict in favor of the plaintiff in the amount of $1.6 million. Two other cases resulted in a verdict in favor of C.R. Bard. One case was dismissed before trial on the Court’s finding that the plaintiff filed the case after the statute of limitations had expired. The final bellwether case in the Arizona MDL is set for trial in May 2019.